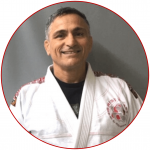 Don Whitefield trained Judo and Boxing in Germany before moving to the West Coast and he started to train Brazilian Jiu-Jitsu under Wellington Dias and Rickson Gracie in 1997. As a purple belt he was introduced to the legendary Ricardo de la Riva by the local Carlson Gracie team and he trains under him ever since. Don received his Brazilian Jiu-Jitsu black belt directly from Master De la Riva in his main academy in Rio de Janeiro, Brazil in 2009.

While travelling across North America for his corporate job he noticed the lack of realistic Martial Arts schools teaching in an organized and safe manner causing him to start his own school with West Coast Martial Arts. Don has always been very passionate about helping people to experience the many benefits of training Jiu-Jitsu while challenging his students to grow as a human being using the lessons they learn on the mats in order to become complete Martial Artists.

Since he began teaching in 2004 Don has taught Jiu-Jitsu to countless students and many of them choose to open their own schools in British Columbia inspired by him. Don is very grateful to see how many of them accepted his challenge to grow and choose to remain loyal members of the De La Riva Jiu-Jitsu team operating their own schools as successful members of the West Coast BJJ Association. 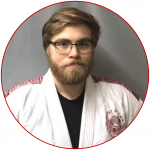 Brodie Koop started his Brazilian Jiu-Jitsu training at age seven under Don Whitefield and has consistently trained ever since.

He is an Black Belt in Kickboxing and an experienced Brown Belt in Brazilian Jiu-Jitsu. Brodie is an easy going twenty-one year old Junior coach with years of teaching experience that cares genuinely about his students regardless of age.

He is passionate about teaching Martial Arts, always has a great attitude and gives his best every day. 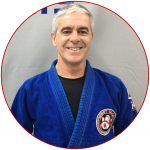 Cameron Watson has had an interest in Martial Arts since the early 1970s.  He began studying Karate, and later My Jong Law Horn Kung Fu with Alex Kwok in Vancouver.  Since then he has trained in other Chinese Martial Arts including Taijiquan, Baguazhang, and Xingyiquan.  He has also trained in Krav Maga.

In 1989 he began practicing Aikido and received his black belt in the art in 1993.  He taught Aikido at Trout Lake Community Center in Vancouver for many years until he started to train Brazilian Jiu-Jitsu with Don Whitefield and West Coast BJJ in 2006.  After many years of dedication to the art and countless hours on the mat he was awarded his black belt in Brazilian Jiu-Jitsu in December of 2019. Cameron teaches the adult BJJ daytime classes in Maple Ridge demonstrating his passion and experience in Martial Arts in each class setting an example for all adult students that they can continue to train BJJ and stay healthy for many years. 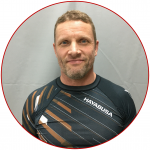 
Demian Williamson began his Martial Arts journey at a local Vancouver Island Judo school in 1996 and he trained hard to received his Judo Brown belt before moving to the US in 2000 where he had the chance to train with a Royler Gracie affiliate earning his BJJ Blue Belt before returning to British Columbia.

He moved to Maple Ridge and began to train with Don and West Coast BJJ in 2005. Although his work took him eventually for a while to Alberta he did return to Maple Ridge and received his well earned BJJ Black Belt in November 2018 from Don. He teaches today every week BJJ classes for West Coast BJJ specializing in No-Gi BJJ supporting his students with passion and care.

Address: 22760 Lougheed Hwy, Maple Ridge, BC
(Across from London Drugs)